MECUM: ethics and aesthetics in a notebook

When a consumer product can become an everyday means of conveying an environmental ethic to the benefit of mankind and the planet. It all started with a notebook.

We live in a digital world surrounded by technological gadgets and yet we are unable to resist the fascination of a sheet of paper. When it comes to writing down our thoughts, even now our instinct is to use a notebook, just like Leonardo da Vinci, Einstein, Hemingway, Leopardi and Heidegger. Computers are useful of course, but when it comes to preserving an emotion or a thought for all eternity, then a sheet of paper is called for! We write stories on them. Stories that talk about us and the world around us made up of objects, nature and people. Touching the textured, tactile surface of recycled paper is like perceiving a part of the tangible, natural world with your fingers. In recycled paper we rediscover the shape of a possible, healthy relationship among men. Recycled paper, straw paper, ricuoio: all materials created by recycling "waste" are a daily reminder of this philosophy that aims to reduce human waste and promote a healthy union between us and the natural world. This is the sense of Francis Bacon’s words “Go there, where nature leads” which Arbos printed at the beginning of its first catalogue 30 years ago. When you look at, touch and use an Arbos notebook, you get a “feel” for all of this. Especially if it is a beautiful object as it is. Seeking out a beautiful object in which to gather everything is important and comes naturally to us. To a certain extent, the beauty of an object stimulates us to create something that is equally as worthy. The intrinsic quality and appearance of a notebook (the care taken over the details, colour, softness to the touch) can thus become a way to convey an ethical choice, an attitude which we decide to adopt every day, every time we pick up a pen or pencil and we carry out that gesture as we have done for thousands of years: writing. The MECUM project was conceived with the goal of offering types of notebook as useful tools for writing that could meet the demands of a rising environmental awareness of modern man. Contemporary notebooks but bearers of by-gone values starting from the name itself. Mecum comes from the Latin cum me and refers to something that you always carry with you. The expression echoes the famous words spoken by the Greek philosopher, Stilpone (4th century BC) to Demetrius Poliorcetes who had just conquered and destroyed the city of Megara. He asked the philosopher why he was leaving the city without taking anything with him. “Omnia mea mecum porto”, (I carry all that is mine with me) replied Stilpone. No better words can define how many people nowadays, through choice or necessity, “set off” taking only their knowledge with them, the desire to learn and to achieve something.

MECUMdraft: from Bodoni to makers

MECUMdraft is above all a tribute to a great Italian, Giovanni Bodoni (1740-1813), acknowledged as the most refined and ingenious typographer of all time. In over 40 years of work in his Stamperia Reale in Parma, he succeeded in mastering the aesthetic principles that even now define perfection, harmony and thus, the beauty of a printed page. His “Typographer’s Manual” is the bible of all graphic artists and designers. But the most significant legacy that Bodoni left us was, without a doubt, the font that he created, the “Bodoni”. The “Bodoni” was not just a font, but a “style” which left its mark on the entire history of graphics from the 18th century to the modern digital era. Steve Jobs, the founder of Apple, recounted how he was so fascinated by the beauty of the Bodoni font that he used it in the very first Macintosh computer.

MECUMdraft pays tribute to Bodoni by using not only his font but also the technique for the binding which was invented by and named after the great typographer, the “Bodonian binding”. The distinctive and unmistakeable Bodonian binding of the MECUMdraft is synonymous with craftsmanship. The sewing of the pages (bindings) which can be seen under the cover of the spine of the notebook is reminiscent of by-gone techniques of skilled binders. Even though this technique is done mechanically nowadays, the procedure for binding the pages is basically the same one as centuries ago! The versatility of the Bodonian binding of MECUMdraft is demonstrated in the “tailor-made” versions of the notebook in which the cover is made with different materials or customised with laser engravings or digital printing. MECUMdraft inspires creativity: instead of an anonymous or mass-produced product, a unique notebook can be produced. One-of-a-kind like each and every one of us! 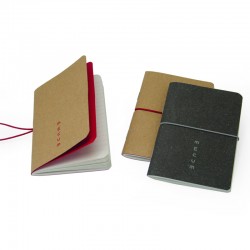 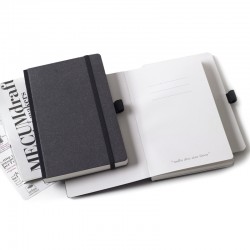 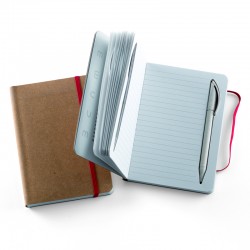 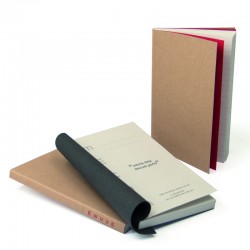