This was the title used 24 twenty-four years ago to present the “QUADERNI” project, an icon of Arbos production. “Quaderni” is a contemporary work of art that has been sold in Italian stationers and bookshops since 1994. A work produced on an industrial-scale, yet a space for reflection and thought, created in the midst of goods for mass consumption, a notebook in which it is possible and pleasant to write, draw, plan, think. “Quaderni” is a project designed and implemented by Mala Arti Visive and Arbos together with the Neon contemporary art gallery of Bologna. This notebook is a flexible tool, a mental and tangible place in which we can reflect upon and plan our time. The artistic aspect consists of emphasising the value of this function in a cultural context and in considering it a decisive element in the commercial-productive sphere or, in other words, in an economy that knows how to introduce culture through production and a culture that succeeds in being shown through daily consumer products. In keeping with the original concept, an essential approach has, therefore, been used to give the product an understated graphic appearance and a manageable shape, at an extremely accessible price. All this has contributed towards creating a “timeless” product which is still fresh and up-to-date even almost a quarter of a century later.

No less than 10 Italian art galleries took part in the QUADERNI project, exhibiting the notebook which had already been used by students, writers and journalists. 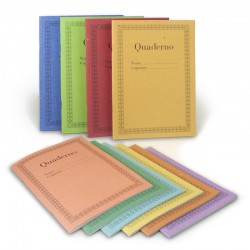